The relationship between a parent and a child is one of the most important ones in anyone’s life. In the past year, life was put on hold, and the world was locked up, and so the dynamics of this relationship have also evolved. Offices, schools, and universities moved into our homes and all our lives moved in an unforeseen direction.

Parent-child relationships tend to be very diverse. Some people tend to be very close with their parents while others lie on the opposite end of the spectrum. To get a better understanding, we did a survey and it has been found that before the pandemic, 46.6% have agreed to be very close to their parents while 10.7% admit to being somewhat close. Dynamics such as these tend to affect relationships more in a time when we are constantly surrounded by our families. Life before the pandemic wasn’t enclosed within the four walls of our houses. Hence, how much one shared with their parents largely varied. While 33% admit to sharing a lot with their parents, 9.7% say that they don’t share at all. In times like these, when the only physical contact we have is with our families, being distant might just prove to be even more isolating. 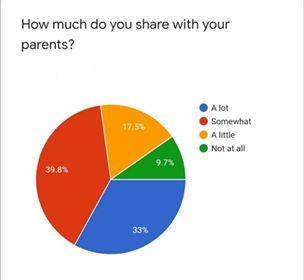 Increased interactions in already tense relationships are like adding fuel to the fire, and seem to be the case for many parents and children. 38% of the people who took part in the survey admitted to increased confrontations with their parents, while the rest denied such forms of negativity. For many people, relationships with their parents are not so pleasant. In such cases, we can only assume that quarantine may not allow them to be in the best state of mind.

However, things seem to be improving for many. 68% of respondents have said that relationships with their parents have improved a lot in the last few months. As families are forced to spend time together, at some point or the other, they are bound to get to know more about each other. When asked for the best memory with their parents this lockdown, 44% of respondents talked about a good memory. Amongst them were those who admitted to increased conflicts this lockdown.  Among various answers, the most common were cooking together, watching movies, having deep and meaningful conversations, recalling beautiful memories, and playing games.

Broadly speaking, parent-child relationships do seem to be changing for the better. As businesses are collapsing and safety concerns skyrocket, parents, being natural worriers must be extremely stressed. This has been reflected in our survey as 78% agree that their parents have been extremely stressed over the past few months. However, only 23% claimed that this had a negative impact on their relationship. 81% of respondents admit to spending more time with their families and agree that doing activities like cooking, playing games, or watching movies tend to have a positive impact on the parent-child relationship.

As mentioned before, this lockdown has forced us to spend more time with our families. Consequently, children are able to see their parents in a new light. They are able to see them as individuals with their own minds and souls, rather than just parents. Parents are acting in a more humane manner, becoming relatively more friendly and conversational. 31% of respondents are experiencing sides of their parents they’ve never seen before. They’re discovering that their parents have talents like singing, dancing, and sewing. As parents are more stressed and impulsive than ever before, children realize how unconditionally their mothers do everything. Fathers seem to break away from the ‘harsh and distant’ stereotype; they have started contributing to daily chores. Some also admitted to their fathers being more emotive and loving. On the other hand, 2-3% of people have also admitted to experiencing anger and tension from their parents.

During such novel circumstances, parent-child relationships have changed, some for the better and some for worse. While both sides do exist, it is safe to say that these relationships are evolving in a progressive way. As children discover new sides of their parents, they are able to understand them better and vice versa. The lockdown has caused parents and children to open up more to each other. As they understand each other better, it allows their bond to grow and helps them cope better with the situation that we are all facing.

Effects of Relationship on Student Life

The Impact of Parental Pressure: Education and Career

The Combined Admission System- Is the Country Ready?