“No one ever tells you when your mom dies, you get a free churro”, such as the satirical line Bojack uses at the start of the episode called “Free Churro”. Bojack Horseman is one of the most popular animation show from Netflix that stars Bojack, A 90’s television actor who is currently a depressed, cynical, narcissistic, self-destructive and self-loathing, alcoholic has-been who complains about everything. But, the episode mentioned in the 5th season is a step off from the traditional ways of a Bojack Horseman episode.

The episode is a 22 minute 20-second monumental monologue centering on Bojack delivering his eulogy at his mother’s funeral. The script for this episode was written by the show creator Raphael Bob-Waksberg, whose choice of theme, thematic management, and cathartic writing made this episode the masterpiece that it is. 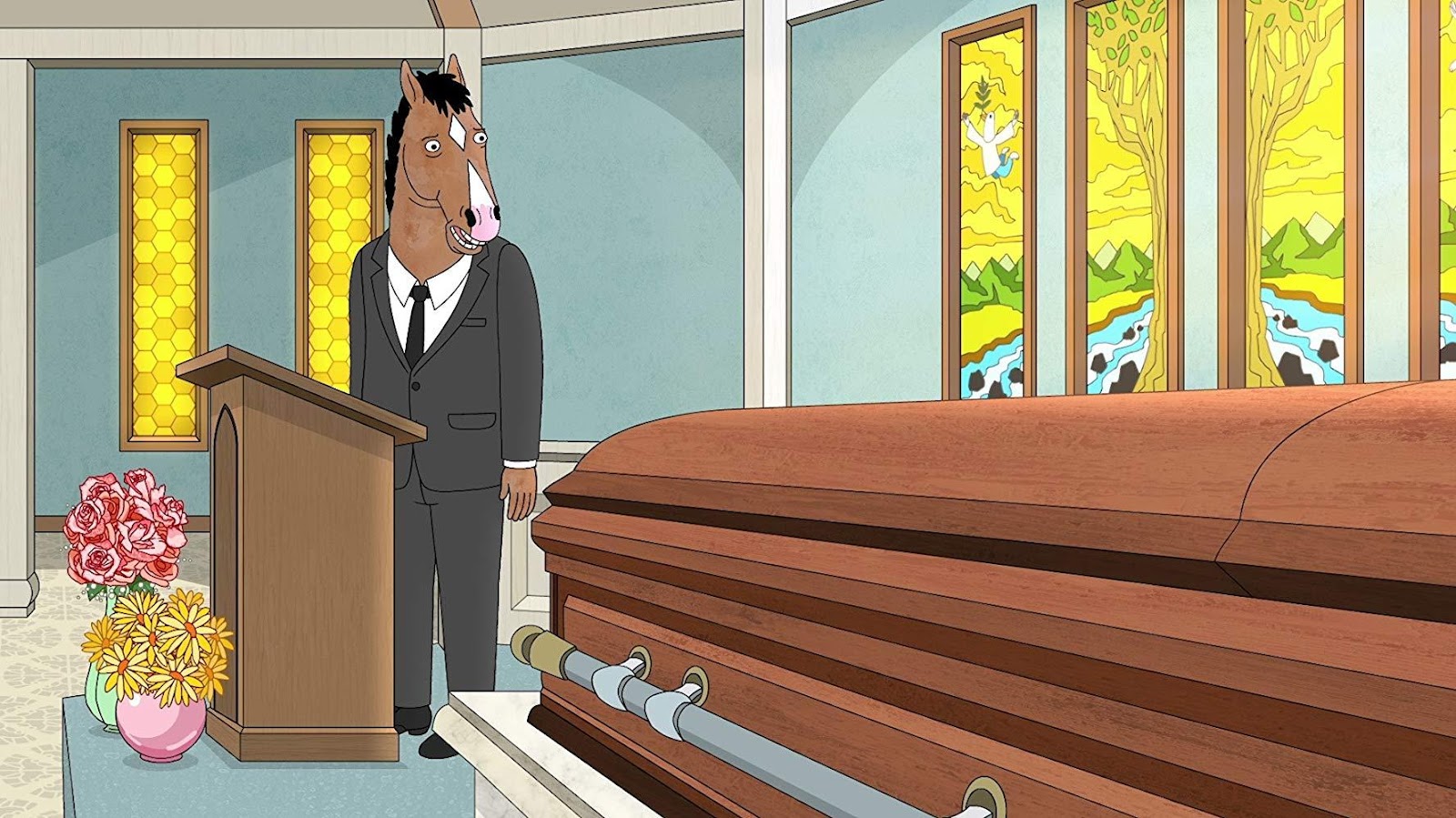 Bojack’s Relationship with his parents

Throughout the episode, Bojack is constantly reminiscing and describing what a horrible childhood he had. His parents were always fighting and sometimes the flames of their fight would scar him as well. Both his parents were dysfunctional in their own way. His mother, Beatrice Horseman, had a rough childhood as well. Resulting in her not treating affectionate towards her own child, always being cruel & distant. Giving life lessons in an unconventional way that circumvents into it being Bojack’s fault. His dad, Butterscotch Horseman, neglected him most of his life to focus on his novel. He saw this novel as his legacy, he thought it would exonerate him from all his lousy behavior.

Bojack clarifies how significant Television was in his life. All the good things in life, he learned through television. He always saw flawed characters vindicating themselves at the end of the day with their surprising grand gesture. He held on to the possibility that one day, his parents would come up with their own grand gesture and show him that they cared in their own way. He kept waiting for it, but it didn’t come and now both his parents were dead. 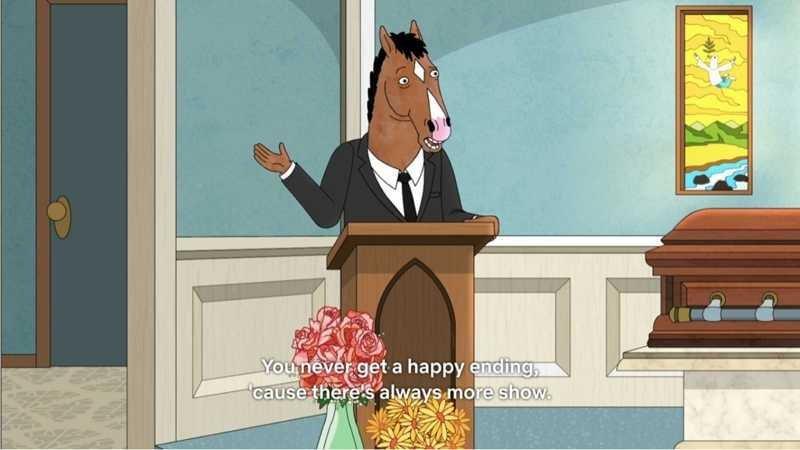 He touched on the subject of death and how death can sometimes come in a meaningful and pitiful way, as he saw from his father’s death. He contemplating how his parents and he knew they were drowning but did not reach out to help one another. How we know about our impending doom and still choose to be small, petty, and malicious rather than making the best of the limited time we have. Bojack saying, “Won’t they be sorry”, thinking about his own death, realizing the two-person who would truly be sorry are gone.

The main theme of the episode centers on Being Seen. Beatrice, in her last word, said to Bojack, “I see you”. That calm and meaningful line coming from his mother startled him. He was ready for all the negative things his mother could spew at him before her death, as she did all his life. But, his mother’s gesture bamboozled him. He conflicted with that quote thinking his mother said that in a cynical way. But he dismissed that idea and thought his mother finally acknowledged him. He finally grasped that her acknowledgment is the thing that was missing from his life, the thing he so long craved for. A lot of people could relate to that empty feeling of “Being Seen”. No matter how much you accomplish or gain if the person you hold dear doesn’t acknowledge it or see what you have become, your life kind of stays hollow. But as the episode was ending, he reminisced back to that part and came to the sudden conclusion that Beatrice was just reading off the sign on the door that said “ICU” (Intensive Care Unit). We see how Bojack’s last grasp at closure fading away and his comprehension of never getting that closure ever again.

Bojack Horseman is a very complex and somewhat relatable character. But, He is not a character whose actions should be revered and followed. His self-destructive tendencies are not “Cool”, but rather warning signs for us to stop ourselves from going down that path. We are all getting more and more subjugated to the life that TV shows and social media shows us and create a false sense of expectations for our own lives. Not realizing it is wrong. Life is not always perfect, friends go away, relationships break and bad things might happen to us. Bojack always referenced his life to the TV shows that he watched, how miserable his life was compared to them, which itself is imprecise. His mother didn’t care to see his show or him in real life only infatuated his desire to become so famous and recognizable that people would be head over heels to see him. We should never dive into the dark abyss of self-obsession and self-destructive behavior that would bring misery into our life. Rather, accept life’s gifts and the problems it sends our way, to vanquish them and rise to become the best version of ourselves. Cherish the people in our lives so we don’t have any regrets in our own deathbed.

Bojack Horseman is a terrific show that tackles hard themes like Mental Health, Addiction, and Hollywood glamour in a way that real-life shows can’t. And this episode just elevated its status to another level. As the end of TV shows, Bojack thought his mother’s death would give him some closure. He expected to gain something from her death, but all he got was a free churro.

Why we should call ‘Joker’ a socially anarchic film

What the Folks Review